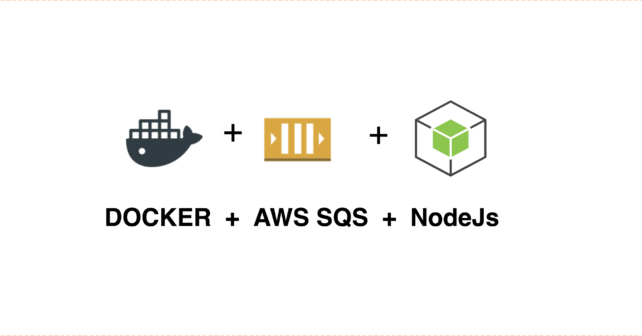 AWS SQS is a Simple Queue Service. It provides REST based endpoints to interact, so it can be used with almost any programming language. NodeJS is getting popular day by day and its non-blocking asynchronous request handling makes it a best choice for web based applications. We will write a simple NodeJs Consumer for AWS SQS.

You can read more about AWS SQS and its benefits on the official Page. However there are few basic things about AWS SQS which I will list here so that we have an understanding about how it works:

Based on the above understanding of AWS SQS we need to do the following things:

Before we dive into the real code there are few things you need to know. I am a huge huge huge Docker fan so everything we are going to discuss and develop in this post will be within Docker containers, so you need to have some understanding of Docker and Docker-compose. There are tons of articles available online detailing the benefits of using Docker containers.

We will use NodeJs based consumer to interact with our AWS SQS, however not every team has the luxury to have AWS SQS queues available for development, so we will use elasticmq. Elasticmq provides the same interface as AWS SQS, so our code will work with real AWS SQS without any change.

Following is the architecture diagram of our setup.

The awesome developers at softwaremill has already created a docker image of elasticmq which we can use.

Create folder named “docker” in your development folder. We will use this folder for managing files related to all the supporting docker containers. In this “docker” directory create a folder named “elasticmq”. Within the “elasticmq” folder we will create two files, Dockerfile and elasticmq.conf.

In the Dockerfile we will import the elasticmq image from docker hub and we will add a config file to configure our queue name. Following is how our Dockerfile will look:

In this file we will configure elasticmq to listen on port 9324 and provide the name of our queue. We can create multiple queues if we want. For development you can keep rest of the settings unchanged and just add the queue names which you want to create. I am creating two queues “MY_SQS_QUEUE” and “MY_SQS_QUEUE_2”. Our elasticmq.conf will look like :

Our SQS container is done. When we will build and run the SQS container. It will have two queues pre created which we can use to push and retrieve messages. Now we will work on our nodejs consumer which will interact with our SQS

To work with NodeJs we need to have npm so that we can manage our project dependencies, however we will not install npm on our development machine but we will use nodeJs docker container to run npm commands.

Lets create a file named npm.sh and wrap our docker run command into it. Following will be the code in this file:

If you notice we are using node:8 docker image from Docker hub. This is the official nodeJs image managed by the nodeJs team. Follwing things are happening in this file:

Make this file executable by running following command (linux specific, you can change it according to your OS):

This command should output the version of npm

Now we will do some real nodeJs programming. Lets create our package.json file and add our dependencies. We will use the following node packages:

Lets create our package.json file and add all our dependencies. Our file will look like:

If you notice in the “scripts” section in our package.json file, we have two scripts index.js and write_message.js, we will create these files shortly. Now if you run the following command it should download all the dependencies into your development folder

After downloading the node packages required for this project lets write our application. Create a folder named “services” in the development folder. This folder will have all our files related to initiating our project. Lets create our first file in “services” directory named sqs.js. This file will have the code required for initiating aws-sdk and getting the object required for communication with AWS SQS. Following will be the code in this file:

We also need to configure our winston logger. There are plenty of options available however we will use basic configuration. Create “logger.js” file and add the following code:

Now we will create our handler. Handler is basically our javascript object which will receive the message from the SQS and process it. You can write your business logic in this function, however we will just receive the message and log it in logger. Create “handler.js” file in “services” directory and add the following code:

Now we will write our index.js file. This file will initiate all the services and finally run our consumer. As a best practice I use environment variables for configuration so that I can easily deploy the application on different environments without changing the actual code. We will create the following environment variables:

We will use these variables and initiate our consumers. Our index.js will have the following code

Consumer will poll the queue every second and process the message received. Lets write our Dockerfile to build and run our nodejs consumer.

Create a file named “Dockerfile” in the development folder and add the following code:

Both our SQS and nodejs consumer containers are now done. Lets create out “docker-compose.yaml” so that we can connect them and run them together

We will create two services in our docker-compose.yaml file. One for the sqs container and other for the nodejs consumer container. We will also create the required environment variables for the respective containers. Our “docker-compose.yaml” file will have the following code:

If you notice in the docker-compose.yaml file we have used “links” and “depends_on” tags to link the two containers. Now lets build and run our containers.Run the following command to pull the docker images and build your containers

Run the following command to run all your containers in the docker-compose.yaml file

After this command you should be able to see the log messages on the terminal and your consumer will be polling the queue for messages. Now we will work on writing messages to the queue.

Write messages to the SQS

To write messages to the SQS we will use AWS SQS sdk. If you have noticed, in our package.json file under “scripts” section we have added “write” key so that we can write a script to write messages to SQS. Lets create a new file named “write_message.js” in our development directory and add the following code:

To write a custom message pass the string with “–” to the command. For example :

Your consumer should receive the message and log in on your command prompt. Full source code of for this post is available on my github repo here. Please feel free to ask any question in the comment section below.